“You need to read more books.”

To some, it could be a death sentence of boredom. To others, it may be a hopeful– but unrealistic– ideal.

To a writer? Really, it’s like an artist being told to look at more paintings, or a musician being ordered to listen to more songs. Natural, necessary, and everything to do with the heart.

“You need to read more books.”

To me, it was Jesus’ soft intensity, reminding me who I am.

Walk into a new room. What’s the first thing you notice? I used to think everyone saw what I saw. But it turns out, not everyone’s eyes lock on the painting on the wall or the bookcase in the corner. Not everyone is analysing the hardcovers and calculating whether they’re from the 1930’s or ’40s. Not everyone is dreaming of being up there themselves.

Could I read 16 books in 2016? It wasn’t even a question of whether I wanted to, or even if I had the capability. If anything, reading 16 new books would be my challenge– I have a penchant for re-reading books I count as classics (from The Horse and His Boy to Northanger Abbey). Then, writing about it– a blog book club, really? Who wants to read my ramblings on books?

And that’s what never ceases to amaze me. I can get lost in this spiritualisation of my life, compartmentalising “serving God” to my daily tasks in the Lewis House kitchen, or the moments I  tell my DTS testimonies to current students. Surely, that’s all God cares about? No. He cares about the creativity that makes us who we are.

“Every man’s island, Jean Louise, every man’s watchman, is his conscience.” 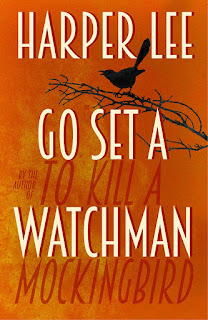 I started it last week, and devoured 278 pages within a few days. Around Christmas I started this mission that I was going to read books that I had started and never finished– That Hideous Strength by C.S. Lewis was a summer reading assignment I “finished” in high school. My next mission, after that, was to finish Charles Dicken’s David Copperfield– another high school attempt. For a month it sat on my bedside table as I took a break by finishing another re-read (The Story Girl by L.M. Montgomery, author of Anne of Green Gables). But I needed a new book.
Go Set a Watchman is set in 1950’s Alabama, two decades after the events of Harper Lee’s classic, To Kill a Mockingbird. Although Harper Lee wrote its manuscript before To Kill a Mockingbird, it was lost, only to be found then published last year. I could claim my absolute excitement– such a classic, now having a sequel! However, I only read To Kill a Mockingbird for the first time last year, upon hearing it was my friend Abbey’s favourite. Somehow it missed my literature class– so, I only just discovered young Scout and her older brother, their father Atticus and a trial in the midst of 1930s segregation.
Go Set a Watchman, however, is not as action-packed as its predecessor. It follows as Scout, or Jean Louise, returns to home to her aging father and small town. She’s faced with ugly segregation– if not worse than what she remembers. Which means– she has a trial of her conscience– in a way, a far more difficult, tricky conflict to weave as a writer. I was skeptical throughout much of the book (though very much identifying with that coming-home-as-an-adult feeling). Then? It hit the point– and I was in awe. I can’t explain it without spoiling it. So, read it.
This morning, after a midnight finish of Go Set a Watchman, I remembered a moment in my senior English Language and Composition class. Our assignment was a short story, and I had turned in a sketch of a girl working in a library and meeting another girl who inspired her to write again. My teacher’s concern, talking to me later? “She sounds too intelligent for a high school girl,” he informed me. “Obviously, it shows you’re intelligent. [Here I tried not to smile too much]. But also, it was interesting that the conflict was one of the mind. Not bad, just rare to see in a short story.”
Am I saying this book’s style reminded me of a short story I wrote in high school? Well, yes. It reminded me of the concern I felt, doing something different. It reminded me of my struggle, as a writer, thinking I didn’t have much “action” in my stories. Yet… somehow… in reading Harper Lee’s story, those worries slunk away. If a famous authoress could write a novel with not so much “happening”, compared to her dramatic prequel– yet still pull it off with grace, poise, and incredible skill? Well, I began to think, maybe there’s hope for me.
So, thanks Abbey, for telling me about To Kill a Mockingbird in the first place, and for loaning me Go Set a Watchman. I’ll be raiding your bookcase again soon.
#16books2016