The Thoughts of Margaret Hale 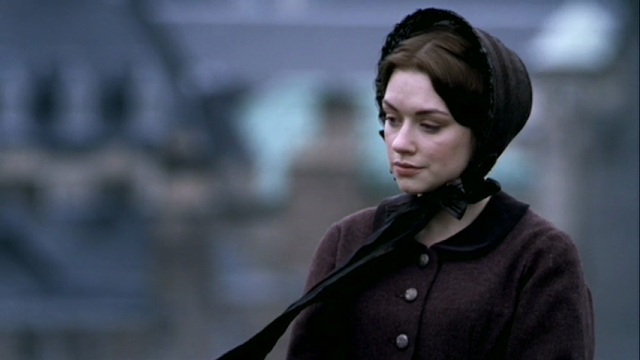 “On some such night as this she remembered promising to herself to live as brave and noble a life as any heroine she ever read or heard of in romance, a life sans peur et sans reproche; it had seemed to her then that she had only to will, and such a life would be accomplished.

And now she had learnt that not only to will, but also to pray, was a necessary condition in the truly heroic.”

After three years absence from her hometown, the character Margaret Hale reminisced on her childhood while sitting by her inn-room window. After reading 377 Kindle pages of hardship and heartbreak in this 19th century romance? My heart felt so much more than you do when simply brushing over a quote with your eyes. Read it again over again, slowly– for my sake.
What amazes me is that this was a novel right up there with Dickens and the Bronte sisters. (Basically that means it was famous in 1854). Despite it being popular literature, Elizabeth Gaskell helped me burst into tears at that moment of the book… because she put the TRUTH in there… that reliance on God… communication with Him… prayer… not just the will of a person… is what gets us through– and makes our stories worth living through and for.
I thought I could do this on my own, yet again. But it seems that the deeper and deeper I get into life, the more I need of Him. The further and further into my story, the more prayer must be honored. Or else I will fall away. You learn things as you grow up. And I have learned that God sure had a whole lot more purpose in my friend Cori telling me to watch the 4-part TV series almost a year ago. North and South. What a beautiful story– one that empowers me not just to dream, but to do. That’s what makes a good novel. Because 400 pages later, me? Besotted.
So, though you have not read the book, could you apply Margaret’s and Elizabeth Gaskell’s wisdom? Could you remember that to be truly heroic– first you must pray?
I will, now. Amen.
photo credit: North and South (2004)